Prunn Castle and the Nibelungenlied 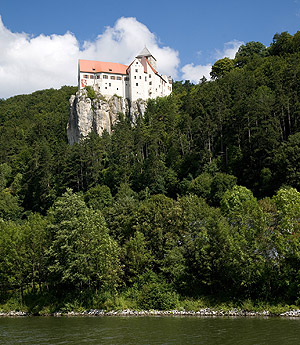 Like an idealized version of a knights’ castle, Prunn Castle is perched on an almost vertical Jurassic outcrop high above the Altmühl river valley south-west of Regensburg. Its impressive appearance from a distance is matched by the views from the castle of the surrounding Altmühltal countryside.

Lords of Prunn were first mentioned in 1037, and they will have certainly chosen the site because of its favourable position on several transportation routes. The castle itself dates from around 1200, a time when many castles were being built. The Danube region centring around Kelheim became very important in this period under the Bavarian duke Ludwig I. One of the oldest parts of the castle is the 31-metre keep.

In 1288, Duke Ludwig of Bavaria acquired the castle from the lords of Prunn-Laaber. In the first half of the 14th century the duke then invested the Fraunberg vom Haag family with the castle. Their coat of arms, the horse on a red background, is still visible from afar on the castle wall. 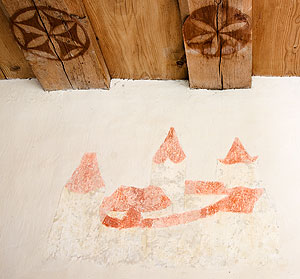 The large Gothic hall on the ground floor of the medieval palas tract also has a noble and imposing appearance. The ambitions and pretensions of the Fraunbergs are equally visible in other features of the castle, such as the finely profiled Gothic portals and fragments of late Gothic murals with depictions of unidentifiable castles.

In the late Middle Ages, Prunn probably also had a widespread cultural influence. After the death of the last Fraunberg count in 1566, Wiguläus Hund, historian and privy councillor of Duke Albrecht V, discovered in the castle the so-called "Prunner Codex", the fourth oldest complete manuscript of the most famous middle high German heroic epic, the Nibelungenlied. 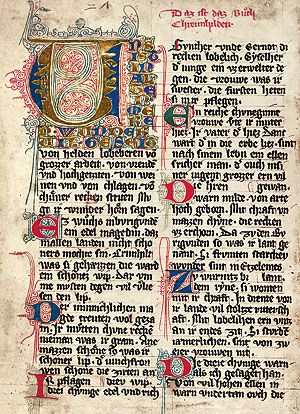 The manuscript was transferred in 1575 to the ducal library in Munich and is today in the Bavarian State Library (Cgm 31).

However, who was this person who found the manuscript in Prunn, is it in any way connected with the lords of Prunn and what was the cultural context in which the Nibelungenlied was related and written?

Visitors touring the permanent exhibition "Prunn Castle and the Nibelungenlied" will find the answers to these exciting questions in a varied sequence of rooms which link various motifs of the Nibelungenlied with the history of the building and the everyday world of its inhabitants.

The topics of hunting, clothing, law and the role of women in the Middle Ages are vividly presented and acquire particularly realistic dimensions at the various hands-on stations.

Recommendation in the social media